The small parish of Zennor lies on the North Western Cornish coast, to the untrained eye the village just looks like a picture perfect Cornish settlement. However the local people of Zennor will tell you a story of enchantment & mystery that will point you in the direction of the village church.

The story begins long ago when a beautiful and strange looking lady that seemed ‘not of this earth’ began to appear occasionally at the church services in the village. None of the villages knew who she was or where she came from and she seemed to disappear as quickly as she appeared.

Many of the local men became enchanted by her beauty, her long long flowing gold hair and in particular her unique singing voice, it was also said that her dress ‘shimmered like the sea on a sunny day’. One local man by the name of Matthew Trewella’s became so besotted over time with this beautiful woman that he took it upon himself to find out who she was and where she came from.

After the church service had concluded one Sunday Matthew decided to follow the lady as she made her way towards the towards the steep cliffs to the West of the village. This was the last time that Matthew and the mysterious lady would ever be seen in Zennor.

Many years had passed since Matthew vanished, so long so that his distraught mother had passed away. But late one summer’s evening the captain of a merchant ship anchored just off the coast to the west of Zennor heard a voice calling out to him. ‘Ship ahoy, ship ahoy’, as the captain leaned over the side of the vessel, a lady with long golden hair was clearly visible in the water. She told the Captain to move the boat as the anchor was blocking the access to her home on the sea bed & her husband Mathy was trapped inside with their children.

The captain fearing that the sight of a what could be a mermaid would bring disaster on the ship, wasted no time in agreeing to this request. As the captain turned away he noticed the the glimmer and swish of tail in the water and the lady was gone! On hearing of the this news from the ship’s captain the local’s decided to commemorate the story by carving the ‘Mermaids Bench’ which can be seen to this day in the church of St Serana in the north of the village.

Zennor can be easily accessed by car and is located just off the B3306. There is also a regular daily bus service to and from the village.

Located within a wooded valley close to Tintagel you will find St Nectans’s Glen, one of Cornwall’s hidden gems. It is believed by to be a deeply spiritual location by local people and visitors alike.

The history of St Nectan’s Glen goes back as far the 6th century when St Nectan lived a life of solitude in a cave located atop one of the waterfalls in the valley. He was believed to have a bell near the entrance to the cave, which he rang out to warn ships near the coast during stormy weather or when the heavy fog rolled in.

A visit to St Nectan’s Glen will lead you on a walk though enchanting woodland mixed with a wide variety of birds and wildlife. Along the way you will see the signs of piskies & fairies that are believed to exist in these parts. Make sure you look out for the fairy stones, especially down by the babbling stream that winds it’s way along your route. In the distance you will already hear the sound of the waterfalls ahead, but take your time and enjoy the splendour that surrounds you on your journey through this ancient woodland.

It’s worth noting that the woodland trail is around a two mile round trip, so take this into account when you are planning your visit.

At the end of the woodland trail a trilogy of waterfalls await you. The main attraction is the waterfall located in St Nectan’s Kieve. This is a magnificent 60ft waterfall that has over time forced it’s way through the stone, to produce a spectacular hole where the water cascade’s down into a shallow pool the valley below.

To get to St Nectan’s Glen by car head from Tintagel to Boscastle on the B3263 road. You can park in the free car park situated just off the road in Trethevy. 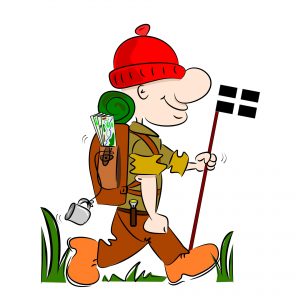